Being Human with Algorithms ? 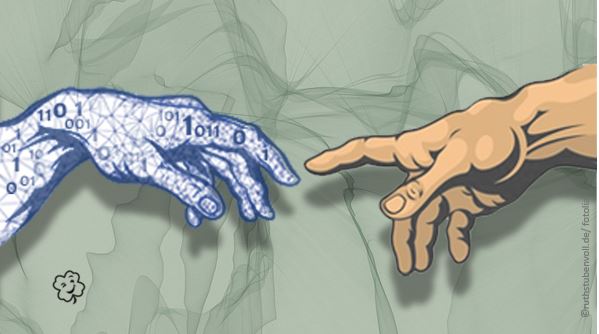 Towards the end of the Middle Ages, there was an academic dispute between the then leading faculties theology and philosophy. Which one of the two was more important based on their origin and should be leading? Who should be mistress and who should be servant? Theology claimed leadership. After some considerations, the philosophers came back with their position: “We don’t have a problem to be servants, as long as the servants are allowed to walk in front carrying the candlestick with a burning candle, rather than carrying the long tail of the mistress.”

Today we discuss a similar question on who should dominate the world – Humans or Algorithms? But that’s much more than a question of role allocation. Do we humans want to be servants of a mechanistic view of the world dependent on machines and computed results? Or do we still want to make our own decisions? Do we want to use algorithms just as tools to shape and develop our world?

What it Means to Be Human

Being human means to have basic needs, consciousness, senses, and mind. During our lives we develop our own identity through reflection, gain of experience and interaction with others. As an individual personality we are able to assume responsibility and make decisions.

Machines are capable to compute. They are able to master huge amounts of data. What they present as result is a calculation result based on binary logic. Not a decision.

At best, it serves to prepare decisions, no matter how far Artificial Intelligence or Deep Learning have advanced. This still remains the simulation of a decision which models human behavior, which is sometimes brilliant, I must admit.

At the moment we humans are responsible for algorithm based decisions made by machines. After the accident of a semi-autonomous Tesla car that did not recognize another car because of difficult lighting conditions, nobody asked how to punish the car. People looked for a responsible person or an organisation.

Did Mankind Change in the Era of Digitalisation?

In my view, the basic needs and the constitution of mankind have not changed. First of all, possibilities and speed to meet our needs have risen by all those algorithm based tools. Now we have to take a decision: Do we want to be the tools’ masters or slaves?

Of course, I know those scientific studies that analyse how humans’ behaviour changes through interaction with machines. Children for example who grow up with those virtual assistants learn to give instructions. Questions or requests are not the preferred style of their communication.

However, I do not agree when people try to explain the superiority of machines by the loss of civilisation. Siegfried Reusch, a German philosopher required “special cultural techniques to master digital challenges. Every machine is nothing more than a possibility to use the creativity of being human.” (der blaue reiter, Journal für Philosophie, Ausgabe 41, 1/2018, S. 5)

Being Human with Algorithms

With our motto, we want to give an impulse to all those, who are engaged with and affected by the developments of the so-called Digital Transformation. Will we remain human in spite of the further development of algorithm-based machines? Will we be conscious that we humans are the only ones who are responsible for all those ingenious binary simulations we currently initiate?

One more thing: As a person who works with language for about 40 years I know that serious thoughts and important texts should be written and published in ones native language. This text is a translation of the former published “Mensch-Sein mit Algorithmen ?” in this blog.